...even if the conference is online only

Participation in the events like conferences and/or meetups was always a good idea. There are lots of articles about it eg. top ones 1, 2 or 3 even the simple query gave you about ~ 150 mln results.

Ok, we are pretty sure about the value it brings. However, let's look closer at the topic. In short, the biggest benefit comes from people interaction. So what we got if we are in the pandemic time, where we can't meet the other people face to face. Well, I'm a tester so I don't take the words for true unless I'll check them by myself. The opportunity I got was an invitation for A4Q World Congress.
A4Q is an organization that "...empowering people and organizations...". It creates syllabuses that give people the ability for certification. Because of this/thanks to this, they are co-working with communities worldwide. And this was the trigger to organize something for the worldwide community. Eventually, the event was a big success, see the numbers (https://a4qworldcongress.com/highlights/), they reached 6,8 mln people.

How about the f2f meeting

The organizers tried to address the communication issues a lot. One of the ideas was to use https://gather.town/. Startup platform where you are becoming the avatar on the previously prepared board. When two avatars are close enough then mic and video are being launched allowing people to talk. If more people are close enough then all of them can talk. Leaving these groups your connection is being dropped. See the lobby. 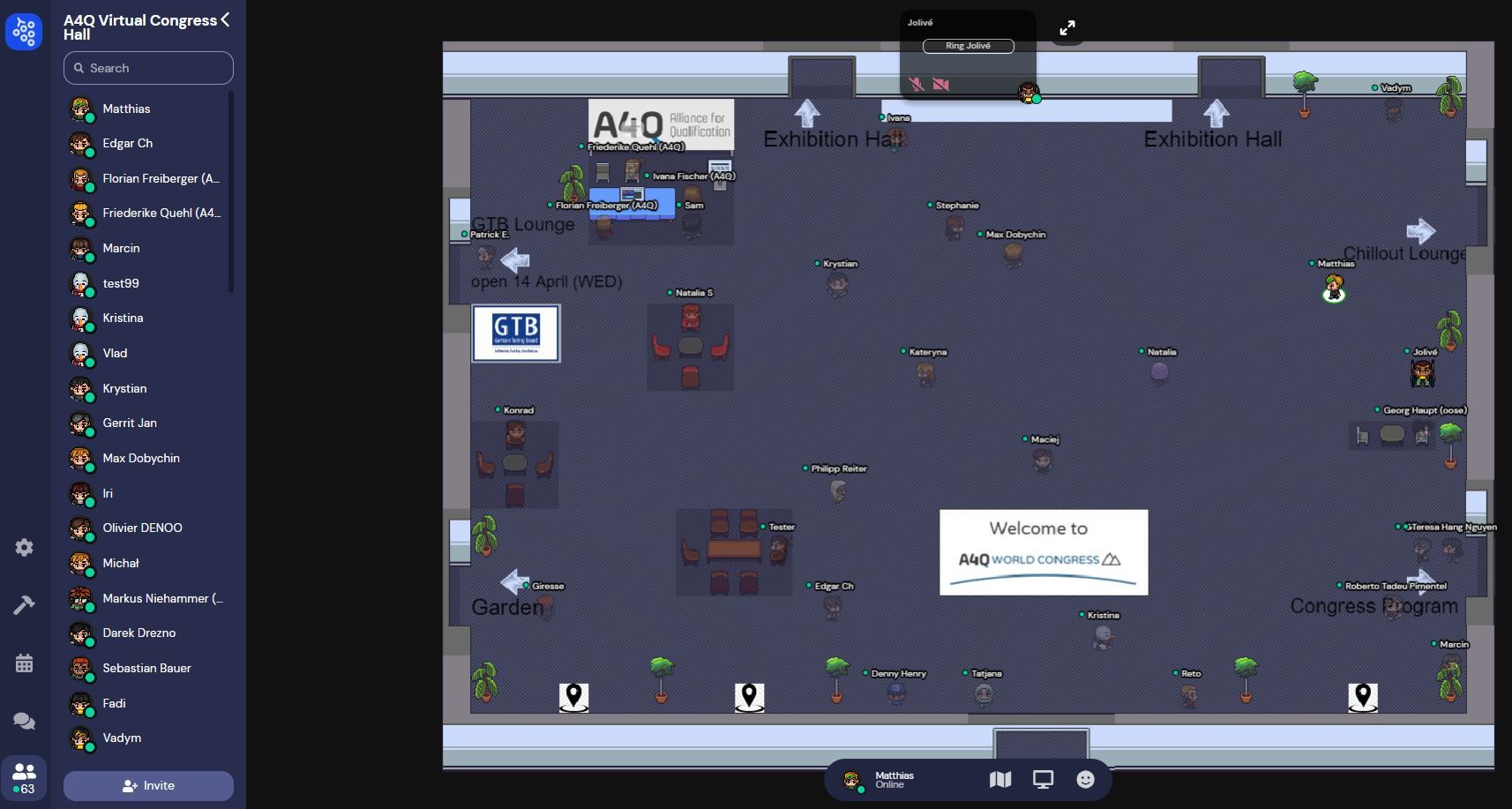 There was also a dedicated place for company exhibitions when you could talk with its representations. 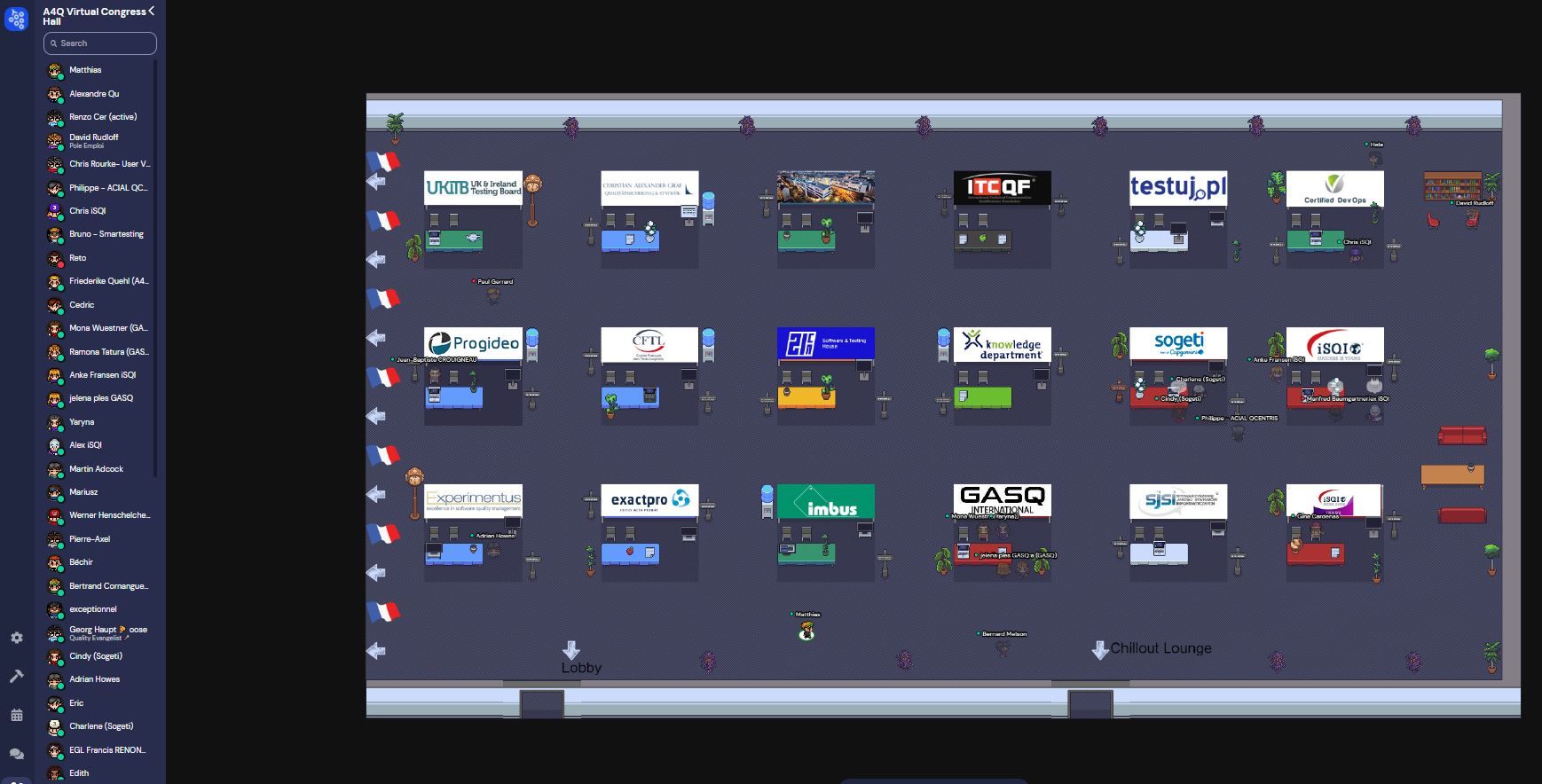 My feedback: it was my third time when I have the opportunity to interact with gather.town. And I need to admit that only once I was able that say: good idea. The model of the whole open day is not the best idea. People were coming, sightseeing has some small chats and leaving without benefits. Thus my favorite model was about 2h meeting once per day with 1-2 short talks and an open mic option. I don't know how much important was to be part of a somehow already integrated group like mine but I have the feeling that would not change too much.

Let's be in touch

The second idea was pretty obvious. The organizers shared the speaker's social media. So that method was working as well as usual. Or even better :-) my LinkedIn profile was hot that day and a few after. Even now, because talks are publicly available people are coming back to talks and comments. Well I encourage you to do so as well

The events especially the virtual ones are even some bigger challenges. Some methods that worked for the on-site still working fine. Some others can not be replaced 'one to one'. People like to interact with each other but they need a guide or moderation, especially at the beginning. As a speaker, you have the same adrenaline, especially that feedback comes not only after the talk but also time after.

Very often systems that you work on connect with external services. Some of the interactions with those are paid, some are free. Testing the free integrations is straightforward - you write tests and execute them every time you want. The only constraint here can be rate limits set by different
Recently I needed to create a POC setup for a client where our software would run in a k8s cluster in IBM Cloud, and the authentication and authorization would be handled by some external user registry. Since we're in the IBM Cloud ecosystem, I thought of App ID [https://www.
Using Docker on an M1 Mac for day-to-day activities is still a pain; a lot of plugins we use don't support the platform switch, and even when executed manually in the terminal, QEMU is painfully slow (I gave up after about 10 minutes of it processing the db2start command...). One